Get fresh music recommendations delivered to your inbox every Friday.
We've updated our Terms of Use. You can review the changes here.

from The Summer of the Cicadas by Royal Ruckus 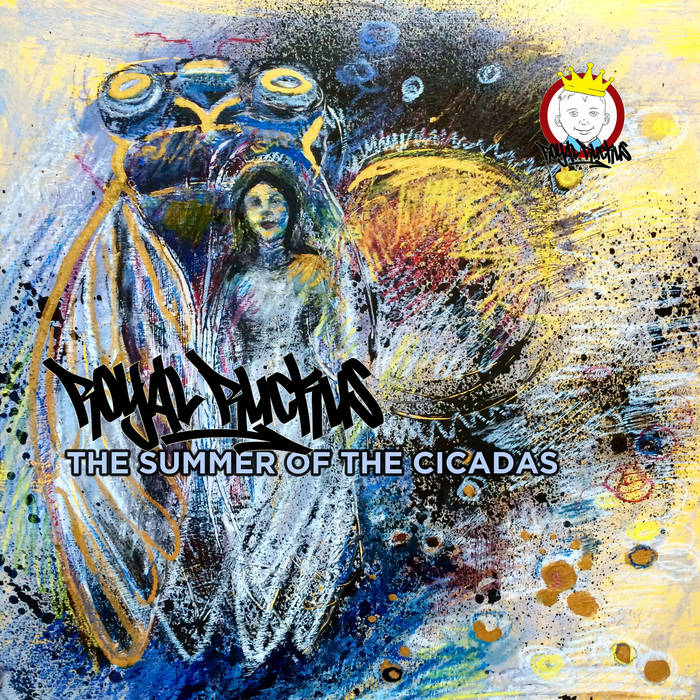 Chunjay:
Kicking down the doors we the crew bringing the Ruckus
Got that moral compass so I’m advocating justice
For the loveless and the loved, rich and poor the weak and toughest
We alone but we’re together and together we some rough necks

Spoken Nerd:
I’m less five-o, more type O-Negative
I’m DIY eating homemade potato chips
8 bit simplish. Quit the quick label it’s
Dripping on my riches like tip toes on a drainage ditch
You’re drenched with the fix
Click, click
The mouse on my computer is the new pistol whip
Attempted merger
My belief is firmer than my grip
On minced meat because the dream is murder

Chunjay:
I got that skin in the game not just talking fussing theory
Others bull with the claims and act so cussing cheery
Getting beery at the pub with my crew and all the rest
Watchin footy with a stout, hit up South by Southwest

Flatline, Chorus:
We are the lone gunmen, you should duck at the click
We’ll throw them bar stools, fisticuffs, mics, or a brick
Solidarity and clarity when opposition strikes
This is a lethal composition so I’m passin the mic

Uncle Dan:
I’m a noobie, ain’t no shame, this is my first official verse
But as a rookie in this game, man, I’ve never been served
I said, “Chun, let’s have some fun, but let’s get it done right”
He said, “Dan, just make a plan, don’t bring a mic to a pun fight”

Chunjay:
Been writing raps since ’92, you better recognize
So I made a batch of songs with trend setter kinda guys
Blue skies be telling lies, letters are in disguise
I’ll be riding fledgling waves until the day of my demise

Max.One:
I literally believe that Adam and Eve were the first to be
To breathe to believe and be deceived
Call me simple-minded
But there’s nothing simple inside it
I complicate the most basic statement
Rearrange it, then erase
Solo: I’m okay
But with brethren: I’m blazing

[Chunjay figures out when he started writing raps]

Flatline, Chorus:
We are the lone gunmen, you should duck at the click
We’ll throw them bar stools, fisticuffs, mics, or a brick
Solidarity and clarity when opposition strikes
This is a lethal composition so I’m passin the mic

Uncle Dan:
There’s not a lot I won’t do for my brothers in arms
There’s not a thing I won’t brew to do our livers some harm
Sometimes the strength is in the few while many alarm
The higher ups in the pews watching over the farm

Chunjay:
I be that living paradox, I bless and I throw rocks
Eternal member in this mess but I’m counting down the clocks
I rocked suburb malls, the underground and into the boondocks
Freshest sound you found around, plus I’m ancient Orthodox

Kalvin Koolidge:
Too Kool to Kal, international
I rage on stage then take a bow
I’m from the Ville, don’t test my skill
Oh, you think I won’t, best believe I will
I gotta mean streak, a machine freak
Like a teen beat, I’m keeping knees weak
I can go all night, I can go all day
Only go one way, where you at, Chunjay?

Chunjay:
Rough necks on the mic & we shaking suckas down
Fools be catching wreck, we walking off with their crowns
Royal Ruckus rock it right and we did it with the clowns?
Hip-hop, kids, and puppies brought that music to your towns

Uncle Dan:
I’ve run the rat race and I’ve walked on my hands
Watched Chun eat tortillas while I hiked the Badlands
While you’re strolling on the trail daydreaming that you’re slick
My hustle’ll close the gap like my name was Scott Jurek

Uncle Dan and Chunjay:
Wait dude, who the heck is Scott Jurek?
Scott Jurek, man, he won the Western States 100 seven consecutive years. You told me to rap about what I know!
Ughh.
Dude, what? So tacos are hip-hop but running stats aren’t? Do you have any idea how hard it was to rhyme “Scott Jurek”?
Whatever man. (Laughs)

Bandcamp Daily  your guide to the world of Bandcamp